Originally discovered and detailed by Dr. Farrand C. Robson of Tacoma, Washington, this therapy has developed over time into a form of treatment that is about allowing the body to balance itself naturally. This allows it to focus emphasis on efficient breathing and eventually alignment of the spine.

The way this happens is by establishing a connection between the jaw, tongue, throat and spine, and allowing those parts of your body to align in a balance. Once this balance is achieved, there will be a great impact on your nervous system as a whole. In fact, the impact is so great that it may very well change your health as a whole and great a new sense of well-being in your life.

When custom orthotics are created, this allows for a patient's jaw, throat, and tongue to achieve a balance, which results in improved breathing, speaking, and swallowing. This greatly helps a patient's nervous system function correctly.

Dr. Robson was one of the first to realize that the tongue plays a bigger role in relation to other parts of the body than was originally believed. He compares it to the rudder of a ship, which guides and directs the entire rest of the boat.

Customized orthotics help to bring the tongue forward, allowing higher levels of oxygen to be taken in as the throat opens. Those with an obstructed throat usually have oxygen levels become compromised. This is mainly caused by a poor tongue position, mostly when asleep.

Because of this, the body can become deprived of oxygen, in a form that mimics choking. If the intake of air into our body is limited, it goes into "fight or flight" mode, which can increase levels of adrenaline to make up for our body's new, natural needs. But with low levels of oxygen and high levels of adrenaline, many problematic symptoms can arise.

Some of these symptoms can include, but are not exclusively limited to:

A forward slouching head posture
~This is caused by the neck extending forward in an attempt to boost oxygen levels
Aches and pains of the muscles and the head
~Results from the over-exertion of tense neck muscles, which attempt to bring the head forward
Jittery feelings, racing thoughts
~Can mimic the effects of caffeine, which can send the body into a state of over-reactivity
Panic and anxiety
~Higher levels of adrenaline can cause the body to be reactive and sensitive
Constant throat-clearing
~This suggests that the body is in need of higher levels of oxygen
Snoring, restless sleep, sleep apnea
~The throat can be compressed by heavy, soft tissue, resulting in lower oxygen levels, which eventually may result in sleep deprivation, which can result in moodiness and low energy levels
Hypersensitivity of the senses and other situations
~Results from the increased adrenaline levels in the body, which is in an over-reactive state

For more information on ANS therapy click on document below:

Accepting new patients. For the best oral health service, call Montgomery Dental Medicine at 513-891-5860 to schedule an appointment. Because it’s not just about your teeth! 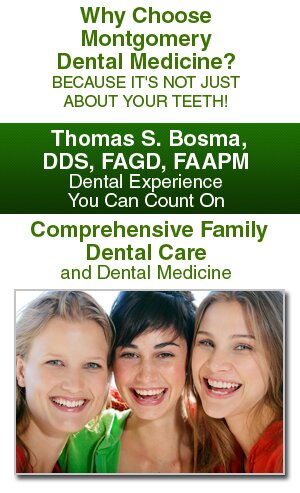