What is Sleep Apnea?

Sleep apnea is a disorder in which a person stops breathing during the night, perhaps hundreds of times, usually for periods of 10 seconds or longer and sometimes for as long as a minute. These gaps in breathing are called apneas. (Apnea literally meaning absence of breath.) It is usually accompanied by snoring. People who have sleep apnea may not even be aware of the condition, but it inevitably causes daytime sleepiness.

Obstructive Sleep Apnea (OSA), the most common form of apnea, occurs when tissues in the lower throat (or airway) collapse at intervals during sleep, thereby blocking the passage of air. In general, OSA occurs as follows:

People with sleep apnea usually do not remember waking up during the night. Indicators of the problem may be such vague symptoms as the following:

Sleep apnea occurs in about 2% of children. They may exhibit symptoms that differ from adults, including the following:

Dr. Bosma would like you to complete the following pediatric sleep questionnaire for your child to help him evaluate their current sleep and airway situation, which plays a major role in dental development.

Any structural abnormality in the face, skull, or airways that cause some obstruction or collapse in the upper airways and reduce air pressures can produce sleep apnea syndrome. Among the most likely structural cause of many cases of sleep apnea are abnormalities in tissue that lie between the back of the mouth and the esophagus {food pipe}. Enlarged soft palates {base of the tongue or the surrounding throat walls especially enlarged tonsils} have been particularly associated with many cases of sleep apnea.

Other causes researchers have identified associated with sleep apnea are as follows:

Because sleep apnea so often includes noisy snoring, the condition can also adversely affect the sleep quality of a patient's bed partner. Spouses or partners may also suffer from sleeplessness and fatigue. In some cases, the snoring can even disrupt relationships. Diagnosis and treatment of sleep apnea in the patient can, of course, help eliminate these problems.

How is Sleep Apnea Diagnosed?

General Guidelines for Seeking a Diagnosis of Sleep Apnea

Chronic daytime sleepiness and habitual snoring are primary signs of sleep apnea. The risks are even higher in people who are overweight, hypertensive, or both. All individuals who think they or a family member may have a sleeping disorder should discuss it with a medical professional immediately. It could just save your life.

Accepting new patients. For the best oral health service, call Montgomery Dental Medicine at 513-891-5860 to schedule an appointment. Because it’s not just about your teeth! 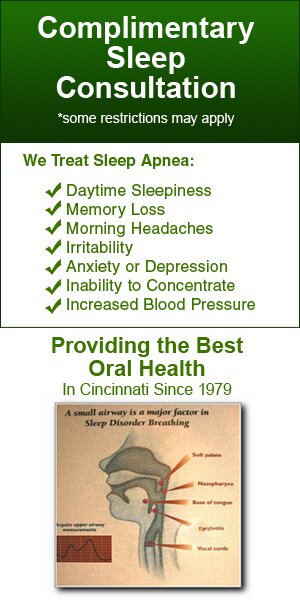